About Us - Elorah Kennels 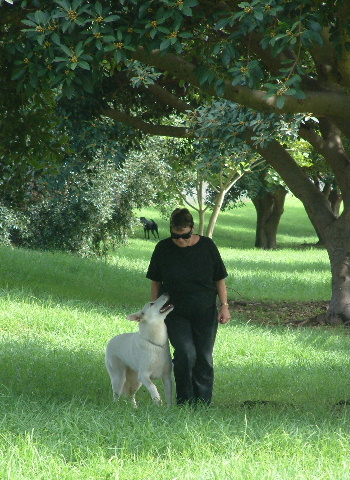 Ever since I can remember I wanted a German Shepherd Dog, but had to wait until I was 30 yrs old for my dream to come true.

My first German Shepherd was a solid black bitch named Gina, from Ronal Kennels in Cardiff. She formed the beginnings of my first registered kennel, Ellimeek, meaning 'my home' in Aboriginal.

Several years after losing my last Shepherd, I was viewing the Don Burke website and found a road test which had been done on the Australian White Shepherd. Intrigued, I rang the numbers supplied by the website and was put in touch with the WSSDCA.

After a few months of waiting I soon became the proud owner of Sandy, a fantastic start to our breeding goals with a hip score of 0:3 and 0:0 elbows.  At the time (2004) Sandy's results made her the lowest scoring bitch in Australia.

Two female puppies were retained from Sandy's first litter, and when x-rayed at 14months old BOTH girls scored 0:0!

With such great beginnings Elorah Kennels was on its way!